An Irish rebel on trial

Trial for murder, sentence and imprisonment 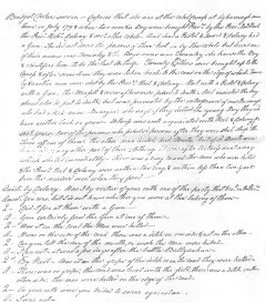 In November 1799, Nicholas Delaney was on trial for his life. He was charged with the abduction of two yeomen (govenment troopers), John Hope and John Brady in June 1798. He was also charged with the murder of Richard Twamley and George Heppenstall in July 1798. If found guilty, he would be hanged.

The only person who pointed a finger at Nicholas was Bridget Dolan, also known as Croppy Biddy. Bid was the most notorious paid informer in Counties Wicklow and Wexford and had once been with the rebel army.

For some reason, the authorities needed to identify Nicholas as one of the men present at Heppenstall and Twamly’s death. They took the trouble to bring in Bridget Dolan to swear that he was one of the murderers.

She accused Nicholas and his friend Edward Neil of being at the rebel camp at Ballymanus. After the defeat of the United Irishmen at the Battle of Vinegar Hill, there were still rebel bands carrying out guerilla tactics in the Wicklow area, and this would have been one of their stopping places on the way to safety in the mountains. It was to this camp that the government men, Twamley and Heppenstall, were taken.

Bid said on oath that she saw Edward Neil, "armed with a pistol", and Nicholas, "armed with a gun" shoot and wound  Heppenstall and Twamley, who fell to the ground, bleeding . They were then piked to death by another man. This allegation was very odd. The usual rebel weapon was a pike; very few of them had firearms. Why would she say they had them? Perhaps to implicate them in the murder, since the death blows were given by someone else.

Nicholas now had to conduct his own defence. He was an illiterate peasant, trying to save his own life. Against him was a vindictive government  and the might of a court determined to see him die. It must have been terrifying. He stood up to them though, bringing forward witnesses who swore he was far away from where the murders took place on that day, July 6th. But there was no chance for him. On December 15, 1799, he was found "guilty of taking Hope and Brady and of the Murder of Richard Twamley and George Heppenstall" and sentenced to death. 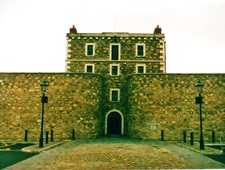 Nicholas Delaney, Edward Neil and other victims of Biddy's perjured evidence were now flung into Wicklow Gaol. When we visited its reopening in 1998, it looked bad enough, but the current Gaol is a modernised one. Any prison in the 18th Century was crowded, dirty, riddled with disease; inhuman conditions to our minds. But in 1799 Wicklow's was worse than ever, stuffed full with convicted rebels.

The prison reformer John Henry Howard visited in 1789 and wrote: "WICKLOW COUNTY GAOL adjoins to the sessions house. On the first floor there is one room for debtors and another for women. Down six steps are two very damp rooms called the low gaol for felons, which have no air or light but by the iron grated door towards the street. A small court; no water. The county proposes to build a new gaol."

It was, of course, in this 'low gaol' that Nicholas was to rot for months, along with the other rebels. Because their story takes a strange twist. All the men accused by Bridget Dolan appealed, and all but Edward Neil had their sentences commuted to 'service abroad' - in the West Indies, perhaps, or the Prussian salt mines. This was such terrible work that many died there, too. But again, the sentence was not carried out and the men, who would come to be known as 'the forgotten prisoners', lay in gaol for another year. At last the Lord Lieutenant of Ireland, the Marquis Cornwallis, saw the papers and judged that because Nicholas and his fellow rebels had spent so long in prison already, their sentences would be commuted to seven years' transportation to New South Wales.